The DIY Magnetic GTS (and a tutorial) 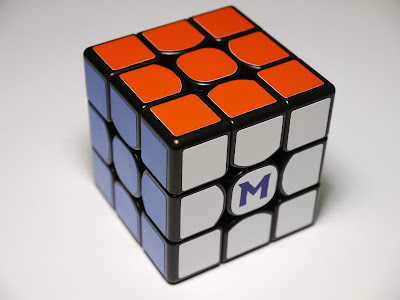 I do understand why they did this. They claim to have spent hundreds of dollars on research and labor is expensive, so obviously they wouldn't sell it for the same price as a typical Premium cube. Even so, the $50 asking price is just too far above the budgets of many, many cubers, mine included.

I remembered that night that out of sheer luck, I had a pack of 50 4x2mm magnets I bought for a 3D printer related project earlier that I never started. (Sorry if you've been waiting for that, by the way. I might still get around to it at some point.) They seemed to fit the GTS corner pieces fine, and since I had a few extra throwaway Weilong GTS's I made one the next day. 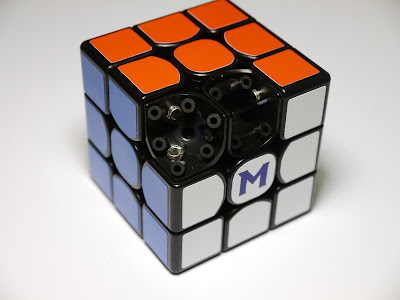 Thoughts on it? Well, it's certainly a good cube, and exactly what I expected out of it. When you get close to completing a turn it wants to snap the turn into place, and when you're starting a turn there's more resistance. That certainly makes it more stable than a typical GTS, which made it very good for OH - I mained it for OH during Slow N' Steady, when the day before I was dead set on the valk.

Besides that, though, it's still just kinda like a GTS. Same speed, same crunchiness, slightly reduced flexiness. The snap is really only apparent when you're turning slowly, and during high speed while you can notice a difference in stability you generally won't feel the snap. Same way the snap of the magnetic pyraminx is also kind of drowned out in high speed.

I do have to bring up: I used N35 rated magnets, which are the cheapest, because that's what I had lying around. Chris Tran said he looked for the magnets that were the strongest for the weight, meaning he probably used N50s which should be stronger. In fact, I felt Waffo's magnetic GTS during SNS, which he requested specifically to have weaker magnets put in it, and it felt almost identical to mine. Because of that, I'll say this is in absolutely no way representative of what a real GTS M might feel like. I'd also recommend that if you want to do this project yourself and want to match the GTS M, you should opt for N50 or N52 magnets instead.

Without further ado, the tutorial.

(I'll update this tutorial after I get another set of magnets in, and can make another magnetic GTS. Until then, you'll just have to live with pictures cobbled from pictures of a normal GTS and pictures of my finished magnetic GTS.)

DISCLAIMER: This is a DIY project involving superglue and high performance Rubik's cubes, which generally do not mix. If you're not careful there's a very real chance of you getting superglue on the friction surfaces, resulting in you altering your cube's feel or worst case even gluing two cubies together. As such, I cannot take responsibility for any damage you may do in an attempt to follow this tutorial.

Materials needed:
Procedures:
You now have a magnetic GTS!

If you found this tutorial helpful or enjoyed reading it, please consider using my Speedcubeshop affiliate link to get a GTS to magnetize or any other cube - it helps me out a lot in writing more reviews or getting other content like this tutorial out.

I hope you enjoyed reading! Good luck on your journey to getting a magnetic GTS!

Phil Yu posted a writeup on Cyoubx's Friends defending the GTS M a few days ago. In it, he mentioned several people were reverse engineering the GTS M and that people had already replicated it, which was likely addressed at me. In it, he basically says he believes it is inappropriate for us to use a BOM to suggest his version is overpriced.

To make myself clear, at one point, during the excitement of having successfully completed a magnetic cube, I did in fact think Thecubicle's version was overpriced. However, since then I've thought it about it a bit more. Thecubicle's version is more than just magnets and a cube: the product itself has the same tensioning, lubing, and pretty flawless stickering any premium cube has, but it also has magnets that are likely placed and attached far more precisely than my hastily superglued version, and on top of that it has the the original experimentation and development that Chris Tran did to create and perfect their cubes. I did suggest that it shouldn't have taken hundreds of dollars of resources to create one, since cubes are cheap and magnets are cheaper, but company time is money. As such, I think $50 is perfectly justified and it's a matter of consumer choice whether or not you want to spend that money for a cube.

Sorry if this isn't up to my usual standard of work, I just wanted to be the first to get a writeup about an aftermarket magnetic GTS out so I threw this together very hastily. :P
Posted by Karl Zhao at 5:29 PM

Started as an extension to my main blog, KZ's Cube Review is a blog for my reviews of 3x3 speedcubes (and any others I may acquire). The goal is to create the largest library of high quality, comprehensive 3x3 reviews.